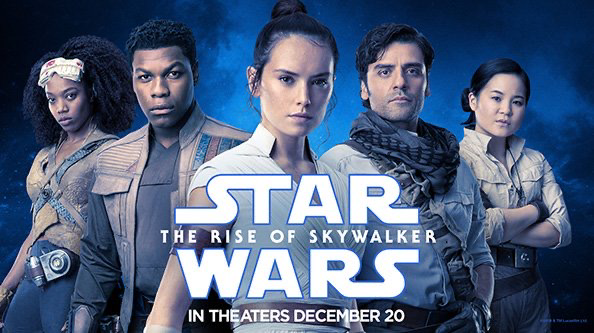 The Rise Of Skywalker: Spoiler-Free Review

Finally, the Skywalker Saga has come to a conclusion with the final installment: The Rise of Skywalker.

Let me start this review by stating that I am not an entertainment journalist. I don’t review movies for a living, and the only press screenings I attend are Star Wars films.

With that being said, The Rise of Skywalker left me feeling more confused than I ever have leaving a Star Wars movie. On one hand, I walked out of the screening feeling satisfied in the arcs of the majority of the characters. I agreed with the overall decisions, the cameos, and even the way Carrie Fisher was used in the story.

But for some reason, I couldn’t shake the feeling that the movie didn’t work for me. As I rattled my brain and recorded my initial reaction for The ForceCast, I kept coming back to the fact I enjoyed the decisions made in the story. I even had fun watching it.

The highs in this chapter are some of the best highs in the entire saga. The character moments with Lando will make you pump your fist in excitement. The cameos that take place will have you wanting to rewatch the movie over and over again — or at least a certain scene. The final scene and resolution of the overall saga feels correct, and the nostalgia intertwines with the new elements fairly seamlessly.

After only one viewing, my major problem with this film is the pacing. The runtime is around that of The Last Jedi, yet it feels like it zoomed by. There weren’t a lot of moments to breathe and digest what just happened. There was a severe lack of moments where John Williams told the story. There were very few scenes like the Vader funeral in Return of the Jedi — ones that allowed the soundtrack and lack of dialogue to create a moment you can’t forget.

From the jump, The Rise of Skywalker immediately inundates you in massive plot points that help not only dictate what this movie is about, but how they will ultimately resolve the saga. There is very little setup and if you blink you miss something very important.

Major moments happen with legacy characters and by the time you realize what’s happening, the moment is over. The movie never takes a second to breathe. It never takes a moment to let things build. The first few words of the opening crawl mirrors that same sentiment.

All in all, what hurts this movie is what makes it so important. Too much to wrap up with too little time to do it. I agreed with almost everything done, I just wish there was more time to do it. Had there been about 30 more minutes, all of this could have been resolved. There are decisions that should have been made in either VII or VIII that could have also freed up time for IX.

The Rise Of Skywalker is a fitting end to an epic saga that spans over 40 years. There is something for every Star Wars fan in this one. Prequels, Originals, Rebels, and Clone Wars fans can feel some sort of relief after watching this conclusion. It was fun, fast-paced, and an epic chapter in this nine chapter story.

Ultimately, I just wish there was more of it. 30 more minutes could have allowed some of the most important moments in the Skywalker Saga to breathe and resonate. This definitely requires multiple rewatches, and I have no doubt that the more you see this film, the more you can appreciate what happens.